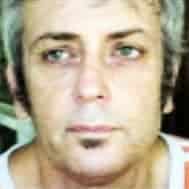 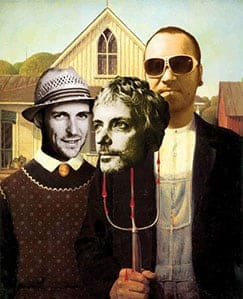 pain is an illusion

Currently I live in Darwin, but last week was over in Ho Chi Minh City, staying with my brother Andrew, his wife Keiko and son Adam.

Proudly I emerged from the plane with my Viet SIM card already installed, booted the iPoo and realized my credit had expired – fancy that – it’s only been 9 months! Will get around to recharging it at some stage no doubt. 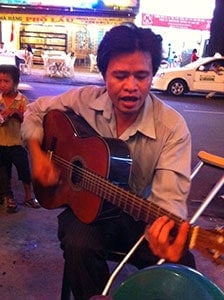 The Visa on arrival went smoothly, despite the obligatory Asian Logic Concept where they take your passport off you then shove a 1940s style form at you asking questions that involve detailed info about your passport. You stand in a long queue filling in the form and listening to the huddled masses grumbling about their lack of a photographic memory. Strangely, despite my position in the queue, I was the first person to be called back. Feeling like a seasoned globetrotter, I thrust Dong at them and got the wave through.

Nice short flight – Mr. Tu delivered me to a bar called RED where Andrew had arranged for me to jump in and play a few tunes.
The Phillipino band were very helpful and I ended up playing a set with their drummer playing a miked box with rods. He was – great got all the stops and starts on the fly. Got a tumultuous reaction and were shouted whiskeys by all the management (about 6 managers at last count), which we promptly ignored (not a big whiskey fan).

We escaped and had Pho Ga (but with beef) at a Chinese restaurant staffed by Viets, with a guitarist on crutches serenading us, while we elbowed the sunglasses, chewing gum, and lighter flogging roaming street vendors out of the way.

Then off to some ridiculous marble staircased doof bar as big as a footy field with galactic sized laser light show and podium dancers, where we shouted at each other in broken cliches as four or five staffs poured drinks from Andrew’s Vodka stash, ashtrays were replaced every few puffs, security guards fondled our buttocks, and floor swept vigorously as we shuffled anxiously from side to side feigning appreciation of the monotonous thumping currently called music, and yelling along to such catchy lyrics as “crack!” – “filth” – “crack! – “filth!!”, while provocatively clad girls almost old enough to be my grandaughters cartwheeled erotically in the vicinity, casting seductive glances at Andrews wallet – the usual.

Then a bumpy cab ride home for a nightcap on the back porch while Luigi the pet rabbit nibbled at Keiko’s herb garden.
A few hours sleep, then the Hilton bros cut loose in the kitchen and knocked out a B & E without the B, and I headed off to the dentist to find out I need 3 more visits, 2 crowns and some minor excavation to get me through the next six months.

Got a cab straight back to An Phu and made an initial incursion at the local supermarket, including a years supply of Sensodyne, and a few varieties of designer bread at the boutique deli over the road. Back to the ranch for snack and chat and now about to rack a few zeds before the afternoons entertainment, which as a centrepiece features a boozy gathering masquerading as a boat ride down the river – and hopefully back. Apparently someone, somewhere in summertime has a boat licence – maybe.

An early night, I predict.